What does it take to get your indie game development funded by donationware?

Having a popular thread on reddit seems to help a lot as indie heroes Lemmy & Binky discovered this week.

While they’ve both been toiling away at indie game development for a while, I think its fair to say that they did so in mild obscurity. This is despite operating an indie dev community site and having worked on a relatively high-profile game. Obscurity wasn’t their only problem though, unfortunately their last game, despite its high-profile and well-funded backing didn’t generate much in the way of a steady income to keep them up and running. Their savings were already depleted and they didn’t have any other income stream. Thinks looked pretty bleak for Lemmy & Binky’s indie dream.

What they did next however was probably the smartest move since quitting their jobs in the first place. They stopped being quiet. Both of them opened up new blogs and they started writing up their game development experiences in a half serious half playful manner. It was something interesting to read and the entries bounced around on twitter, particularly one of Lemmy’s early ones detailing his fall from XNA cheerleader to XNA sceptic. I don’t have any hard data but I wouldn’t be surprised if this caused both of their follower counts to start creeping upwards, and more importantly it laid the groundwork for what happened next. People were suddenly paying closer attention to Lemmy & Binky and were more likely to give attention to any links they posted.

What came next of course is that they decided to announce their last ditch, save-the-indie-dream game and beg for money to fund their extravagant ginger-nut dunking, game developer life styles. It was a massive success. Combining the ever popular zombie theme with the operating model from the enormously successful Minecraft ignited an already potent mix of base ingredients, and imploring puppy dog eyes, into a full-blown indie fireball of joy – and vital rent paying pennies. The redditors swarmed Lemmy’s blog and it went down under the strain. Even super-cool-to-the-right-sort, Father Ted creator Graham Linehan got in on the act and started following Lemmy for news on Project Zomboid. Within a day they had enough donations to keep the wolves from the door for a month and probably even enough left over to buy a celebratory pack of Jelly Tots. They hadn’t even needed a video let alone a functioning game demo.

Of course donationware isn’t a new force in indie games, Dwarf Fortress has been operating on this model for years now but it is pretty rare to see it succeed so brilliantly with a couple of *relative* unknowns, a written game concept and a handful of screenshots. Lemmy & Binky aren’t going to test their luck forever though, the current plan is to transfer to asking for a fixed sum for access to the full version with free future updates once they actually have a full version to offer. All the same any indie developer finding themselves struggling could do well to learn from their experiences:

You can read loads more about Project Zomboid (and donate to get the game when it is released) over at Binky’s blog.

Last Friday the loose rabble that is the UK indie game dev scene had something new; its own conference for developers. It was setup by the chaps at Pixel Lab with help from Channel 4 and a few others and let a group of about 80 indie developers and related allsorts talk at each other and socialise a bit. It being held in the UK, the day went something like this: 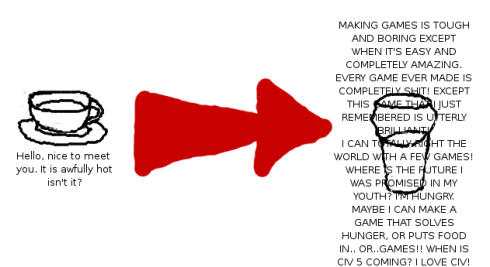 There was probably two loose overall themes arising from the day across a range of the speakers:

There were also a couple of interesting, counter to the prevailing wind, moments that stuck out for me:

It was great to see so many people interested in and passionate about indie games and why they wanted to be indie. I really hope that the UK indie community can build on an event like this and have more interesting things like it in the future.

Other people’s write ups (I’ll add more if I find them):

There has been a pair of incidents in the past week that have brought the thorny topic of game journalism ethics back to the fore. First Microsoft thought it wise to bring their E3 conference to a close by handing out a free brand new ‘slim’ X-Box 360 to every member of the press in attendance. Then later in the week RPS broke a story about how the review embargo for Realtime Worlds new game ‘APB’ was being set ten days after the game was on sale.

Perhaps the most saddening thing about both of these stories wasn’t the actions of the companies involved, though those were eye rolling acts, but the reaction of some commentators rushing to say ‘it’s no big deal, after all it’s only video games journalism’. I’m not sure if this reaction was due to a continuing lack of respect for the people in the trade, a disbelief in the usefulness of the trade itself, a disbelief in the power of bribes and information control or a disbelief in the value of games themselves as a worthwhile endeavour. I don’t agree with any of these positions and I thought it might be worthwhile to explain why.

As a game developer I believe in the value of games as entertainment, as teaching tools and as an art form that can give us powerful experiences impossible anywhere else. To me it is the most exciting and novel field of entertainment with so much still left to say and do. I think it’s a completely valuable activity to try to bring about the best possible game experiences. They aren’t ‘just games’ to me and making them isn’t about just messing around to avoid doing a ‘real’ job.

If you believe that games are important then you should also believe in good games criticism. Almost nothing worthwhile in philosophy or science has been done that hasn’t been improved by well targeted criticism. If philosopher’s had just accepted Plato’s forms unquestioningly why might still be enjoying learning about his theories today. Creation so often starts with pinpointing the flaws in what exists already and then looking for a better alternative. If there is no one looking for any flaws then there is no reason to change, no reason to reject the status quo, no reason to create. In such a world perhaps chess could be the last word in games and we would all play it for eternity. You can get criticism from everywhere of course, from the man in the street to the creators themselves but there is no substitute for the practiced, professional critic. Criticism is a hard skill. It’s not enough to just feel that a game is ‘a bit off’ you must pin point exactly the reason why, you have to be able to compare and contrast with the features of thousands of games at your finger tips, you must be wise enough to prise the gleaming diamond of a great mechanic buried deeply in an otherwise terrible game. Most of all though you must be completely honest in your assessments.

I don’t think its possible to be honest as a journalist in any field if you are accepting gifts from the people you are supposed to be holding to account. It is human nature to feel a need to reciprocate any act of kindness, it’s one of the principles of honest human civilization. No matter how convinced you are that a ‘gift’ could never affect your incorruptible judgement, the chances are you are wrong. Just as everyone believes that they are not affected by advertising, and everyone else is the bad drivers making the roads unsafe, it’s usually a safe bet that no-one is infallible given the right conditions. Most responsible publications are well aware of the dangers of allowing their staff to receive gifts from public relations firms and have strict policies requiring the return of any such items. If modern game journalism with its click driven website model wants to be respected then it needs to maintain these same policies.

You also can’t be an honest journalist if you agree to not report the truth when it’s most needed, too many journalists now appear to be accepting ‘hush money’ or more commonly, increased access in exchange for keeping quiet. If actions like the APB post release review embargo are allowed to stand then why not start allowing the PR firms to have copy approval on reviews for increased access as well? There has to be a clear line drawn; and that line must be when you have to start keeping quiet or lying to your audience, especially when not doing so would be in their interests.

Luckily, for those of us who develop games, there are good journalists out there. There are people who grasp all these points completely and feel as passionately as I do about the importance and value of games, and who care about their journalism and the ethics of it. I even link to a few of them over on the side of this site; in particular Rock, Paper, Shotgun stands out for their courage in exposing unethical behaviour in the industry, but there are many more. Nobody should despair overly about the games industry while voices like these remain active, caring and honest. They help keep the game developers honest and as such are just as important as those of us making the games in the first place.